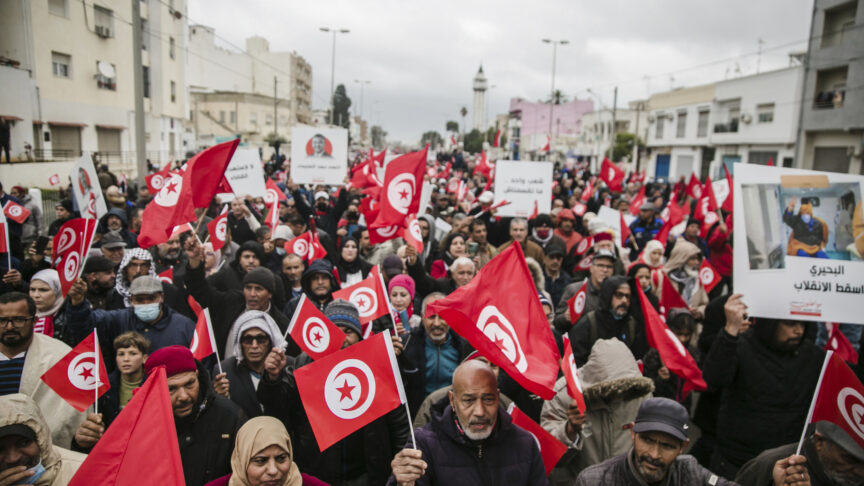 We, the undermentioned civil society organisations working in different regions of the world, stand in Solidarity with the People of Tunisia and express serious concerns over the sustained erosion of civic space and fundamental rights in Tunisia. Amidst growing economic and social challenges, over the last 12 months, President Kaïs Saïed has taken unilateral decisions to consolidate his authority and continues to silence those who speak out about the decline of civic freedoms. Below, we outline some restrictions on fundamental freedoms that seek to reverse democratic gains made after the protests in 2011 and the political transition, and we call on President Saïed and the international community to take appropriate steps to consult civil society and the wider public and lift all the ongoing restrictions.

On 7 February 2022,  President Saïed announced the dissolution of the High Judicial Council by decree, replacing it with an interim Supreme Judicial Council. The High Judicial Council is a body mandated to ensure the proper functioning of Justice, the independence of the judicial authorities and was responsible for appointing persons to most judicial positions. At the time of the announcement,  the premises of the High Judicial Council were cordoned off by Internal Security Forces, preventing its members from accessing the building. Following its creation in 2016, the Council has been recognised as a major step forward in consolidating the rule of Law, separation of powers and independence of the judiciary. The decision to dissolve the Council was preceded by a series of verbal attacks by the President, who accused the judiciary of being corrupt and spoke of the imperative to “purify” the judiciary of corruption. The UN High Commissioner for Human Rights Michelle Bachelet noted that the dissolution of the High Judicial Council is a clear violation of Tunisia’s obligations under international human rights law. The dissolution of the Council is seen as another attempt to remove the necessary checks of executive power and represents a major affront on the independence of the judiciary, the separation of powers and the rule of Law.

We are concerned about draft amendments to Decree-Law No 2011-88 of 24 September 2011 on associations that seek to curtail the ability of civil society organisations to operate freely and undermine freedom of association. The proposed draft has not been made public by the authorities yet, and we are concerned that they may be rushed through without adequate consultations with civil society and the general public. The amendments contain provisions that are vague and would provide the authorities with the discretion to interfere in the activities of civil society organisations. Whereas under the current Law, associations become legal entities once they submit a declaration of incorporation to the relevant authorities, a new draft bill increases the bureaucratic requirements for the registration of associations.

According to the draft amendments, associations can only be granted a legal personality after their registration request is approved by the authorities and then made public through an official Gazette. If passed into Law, many associations may be forced to operate outside the margins of the Law as the authorities may target groups working on issues considered sensitive to the state and delay the announcement of the group’s registration in the official Gazette indefinitely. They prohibit associations from working on issues deemed by the state to be a threat to “state unity and the democratic system” and only allow associations to receive funds, donations or grants after they have been authorised by the Tunisian Financial Analysis Committee. These amendments are at variance with regional and international human rights guidelines on freedom of assembly and would seriously curtail freedom of association in Tunisia.

Authoritarianism fuelled as President increasingly concentrates power in his hands

On 25 July 2021, President Saïed suspended parliament, lifted parliamentary immunity, dismissed the head of government and took control of the Office of the Public Protector using Article 80 of the Constitution. He cited the political crisis facing the country, the inability of the state to manage the worsening Covid-19 pandemic and challenges with the economy as reasons for taking these actions. He dismissed four members of Parliament and imposed limitations on travel and movements of some government officials.

On 22 September 2021, the Constitutional crisis was exacerbated after President Saïed unilaterally issued a Presidential Decree abolishing several sections of the Constitution and transferred legislative powers and the executive powers of the Head of Government into the hands of the President. By concentrating power in this manner, President Saïed has created an undemocratic system without the necessary checks on the excesses of the state. This concentration of power has coincided with arbitrary detentions and travel bans on people who are critical of these actions of the government, restrictions on journalists and media outlets and repression of peaceful protests.

On 6 October 2021, security forces seized the broadcasting equipment of Zitouna TV after the High Authority for Audiovisual Communication (HAICA) ruled that the channel had been operating illegally. Before that, on 3 October, Zitouna TV presenter Amer Ayad was arrested by the authorities and accused of plotting against state security. He was arrested after reading a poem on air written by Iraqi poet Ahmed Matar – famous for his people and satire about dictators. He was also critical of the actions of President Saïed.  Zitouna TV Network was set up in 2012 after former President Ben Ali was removed from office. To this day, Al Jazeera operates from the front yeard of the National Union of Tunisian Journalists after its offices were raided in July 2021, and the keys to the office were confiscated. The station has been denied authorisation to cover events and now operates using borrowed footage.

Proposed changes to the Tunisian Constitution

In an address to the nation on 13 December 2021, President Saïed announced a road map unilaterally for a political transition and an online consultation on constitutional and political reforms that would start in January 2022. According to the road map, a National Committee will be set up to review and combine proposals made during the online consultations on the new Constitution on 22 March 2022. This will be followed by a referendum on the Constitution in July and legislative elections on 17 December. If implemented in its current form, the road map effectively extends the state of emergency by another year and gives President Saïed time to further consolidate his powers and silence critics. If elections go ahead in December, it also means President Saïed would have effectively dissolved Parliament. He has also ignored all calls from different groups in Tunisia to organise a national dialogue, including proposals by the Tunisian General Labour Union (UGTT) to create a National Consultative Committee to ensure a legal framework for inclusive social and political reforms.

Ongoing attacks on freedom of assembly and targeting of protesters

On 14 January 2022, security forces forcefully dispersed peaceful protests who commemorated the 11th anniversary of the departure of former President Ben Ali and expressed concerns over the actions taken by President Saïed to consolidate power. Security forces used sticks, water cannons and tear gas to disperse the protests leaving several protesters injured. Violence was also used to repress demonstrations in January 2021, and more than 1300 protesters were arrested as protesters against the dire economic conditions, corruption, impunity and police repression spread across the country. Security forces were deployed around Habib Bourguiba Avenue in Tunis – the traditional meeting point of the 2011 demonstration and prevented protesters from reaching the avenue and several protesters arrested. Journalists who covered the protests were also targeted as police requested footage of what they had covered during the protests.

The CIVICUS Monitor, an online platform that tracks threats to civil society in countries across the globe, rates civic space, the space for civil society in Tunisia, as Obstructed. Tunisia is also currently listed on the Watch List of the Monitor.

In order to restore constitutionalism, the rule of Law and reverse the abuse of power, we recommend the following;

To the government of Tunisia

Revise the political road map and open a consultation process that involves all stakeholders for a negotiated return to constitutionalism, the rule of Law and independence of the judiciary

Fully restore the authority of the High Judicial Council and reinstate the privileges of all its members to foster its independence in decision making related to judicial matters.

Withdraw all restrictive provisions of Law No 2011-88 of 24 September 2011 and consult widely with civil society, the public, the political opposition and Unions before proposing any amendments to laws in the future.

Fully restore the powers of the Parliament, reinstate the immunity of all parliamentarians and stop subjecting parliamentarians who speak about the excesses of the state to judicial persecution and travel restrictions.

Fully restore all broadcasting rights of Zitouna TV and hand over all equipment seized and stop targeting independent media outlets.

Halt the ongoing virtual consultation on a new Constitution and create a National Consultative Committee to ensure a legal framework for political and social reforms.

Guarantee the separation of powers between the executive, legislature and judiciary in line with the Constitution.

To the European Union

Release an urgent call to President Saïed to restore the authority of the Parliament and the High Judicial Council and to take immediate steps to guarantee separation of powers in line with the Constitution.

Organise an international conference on Tunisia to address the human rights situation, seek solutions to the economic and social crisis and restore the rule of Law.

Prioritise cooperation programmes that target communities in Tunisia and the broader public, which will lift them out of the economic and social crisis and create spaces for political participation.

To the International Community

The African Union, US, France and Germany should urgently call on President Saïed to restore constitutional order and the rule of Law and stop concentrating power into his hands.