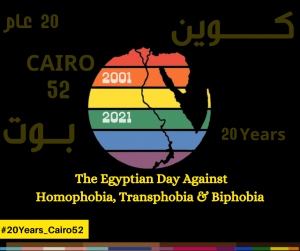 On the 20th anniversary of the Queen Boat incident

In a context where Egyptian police routinely prosecute and arrest LGBTIQ+ people by using fabricated charges such as “immorality,” “incitement to immorality,” “misuse of social media,” and belonging to terrorist groups “, we, the undersigned human rights organizations call on the Egyptian government to immediately stop arresting or detaining individuals based on their sexual orientation or gender identity, as no one should face discrimination, intimidation or imprisonment because of their sexuality or gender; and to make public space for civil society organizations to work freely to serve this community.

Early in the morning of May 11, 2001, the Egyptian police raided “the Queen Boat” nightclub and arrested 52 gay men who where there to socialize. After that, the pro-regime media published the full names of the detainees, the whereabouts of their work and their families in a fierce smear campaign against homosexuality. In 2012, this anniversary was chosen to be the Egyptian Day against Homophobia, Transphobia, and Bisexuality by LGBTQI+ activist and organizations in Egypt.

During two decades, and despite political changes, successive governments have systematically cracked down on people based on their perceived or real sexual orientation or gender identity, arrested and tortured them. September 2017 witnessed the worst crackdown, as the police arrested more than 72 people after the Rainbow flag was raised during a concert of the Lebanese band “Mashrou ‘Leila” in Cairo.

The Egyptian police are seriously searching for LGBTIQ+ people and monitoring them through dating apps and social media. The ”  Queen Boat Twentieth anniversary” report documented two techniques and basic practices that the police use to trap LGBTIQ+ people.  The first one is the creation of police-affiliated fake accounts on dating apps on smartphones to entrap individuals. Secondly, the nightly security campaigns on known gathering places for LGBTIQ+ people, such as Ramses Square, and some cafes and public places in downtown Cairo, and the arrests taking place as soon as the person is suspected of having a homosexual orientation.

The Egyptian government has a long track record of using the LGBTIQ+ community as a scapegoat, as it uses homosexuality and people living with HIV to distract public opinion from the human rights system’s crimes against the Egyptian people. The Egyptian government has previously launched numerous attacks against community members, including the Qasr al-Nil arrests in 2003, the video case of “gay marriage,” and “Bab al-Bahr” in 2014, “The Rainbow Flag” in 2017, and the arrest of many LGBTIQ+ rights defender in 2019 and, most recently, the Fairmont case in 2020.

On another level, the system also takes advantage of the lack of awareness, lack of correct information, and unjustified fear of HIV and uses state-owned media to broadcast hate speech toward people living with HIV.

During the past years, and as a result of the political and social atmosphere that encourages hatred and the rejection of the other, hate speech against LGBTIQ+ people has spread widely, especially on social media, and Egypt witnessed the emergence of so-called “schools” that aim to “heal” homosexuality and prevent gender transitions. The Egyptian Medical Syndicate did not take any steps to prevent doctors from conducting these “treatments”. The state’s support for this form of hatred and myths related to homosexuality is evident.

Since 2013 under the leadership of President Abdel Fattah El-Sisi, the law for “practicing immorality and immorality“, which was used in the early 2000s against gay men and transgender women, has been widely used. In the last three years, the Egyptian authorities have carried out a systematic strategy of prosecutions, and during these years other laws such as “belonging to a Terrorist group” and ” misuse of social media ” were also used.

The progress of the LGBTIQ+ movement in Egypt:

Despite the strong attempts to marginalize and suppress the LGBTIQ+ community in Egypt and ban their appearance in the media, their presence began to gain support and momentum over the past years, especially after the passing of lesbian activist Sarah Hegazy in her exile in Canada in June 2020. Despite the challenges, human rights Defenders and LGBTIQ+ activists remain determined to demand and respect their basic rights and create a space for action.

On this day, we would like to commend all spectrums of LGBTIQ+ people for their courage in supporting each other, breaking the societal silence, accepting the dangers of being bullied or arrested, and for their ingenuity and determination to take advantage of opportunities and challenges to stand together.

So let us all stand today in solidarity with the rights of LGBTIQ+ people in Egypt and the world.

During the past few days, the ANKH Association, the Coalition of Queer Organizations, and 25 international and regional organizations sent a joint letter to the governments of European countries, the ambassadors of human rights in the European Union and England, and the foreign ministers of the United States of America and Canada, urging them to speak publicly about the violations of the Egyptian regime against LGBTIQ+ people and stop stalking and harassing individuals based on their real or alleged sexual orientation or gender identity.

Based on the above, we ask the Egyptian government to immediately stop persecuting and harassing individuals based on their real or alleged sexual orientation or gender identity.